Putting up a Garden Fence

Home » Putting up a Garden Fence
Previous Next

Putting up a Garden Fence 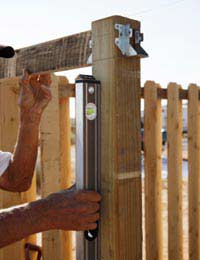 Garden fencing is generally quite simple to put up. There’s a lot of hard digging but mostly the skill is in knowing what fixings to use where.

The key to a good strong fence is getting the posts in securely. Then if parts of the fence deteriorate, as they will eventually, regardless of how well you look after them, they can be replaced without having to redo the posts. The type of mounting for the fence post will depend on the ground beneath it.

Concrete or other hard landscaping will require baseplates that bolt to the paving. Soft ground, such as flower beds or a lawn can be tackled by driving spiked socket supports into the ground; the posts drop into these. Or you can dig holes for the posts, packing the bottom and sides with rubble (hardcore) and then a layer of concrete. We cover these methods in detail in a separate article in this section.

In this article we’re picking the job up when the first post is in place. You then mount a fence panel followed by the second post. Then continue erecting a panel followed by a post until you reach the end. If you are concreting the posts in you shouldn’t do that yet. Get all the panels fitted first, at least loosely, and finish off with the concrete once you are sure everything is properly in place.

Placing the panels is really a two person job, one to hold the panel and the other to fit it. The easiest way (and we’re assuming timber posts) is to use proper fencing clips. These are U-shaped brackets made from galvanised steel to prevent them from rusting.

The bottom of the U is nailed or screwed to the post and the fence panel slotted between the sides of the bracket. These are then nailed to the upright of the fence panel frame. You can just nail the panel uprights to the posts, one nail from each side, but it’s trickier to do and harder to remove single panels for replacement later.

The average panel will need three brackets at each end. If you decide to use screws, drill pilot holes first to avoid splitting the wood.

Depending on your situation you may need to put gravel boards in. If you are putting the fence over hard landscaping like concrete or paving, you need to leave a gap of about half an inch at the bottom. This stops water collecting and soaking up into the fence panel.

If the fence is going over soft ground you need to take more stringent measures to protect against damp at the bottom of the panels and that’s where gravel boards come in. They are basically hardwood planks fitted beneath the panels, which will be more resistant to damp. You need to leave a larger gap under the fence panels, probably about six inches, then cut the gravel boards to fit.

You can fit the gravel boards as you go, putting them in first then putting the fence panel of top, or leave it till the end and cut them to fit the gaps. They can be fixed to the front or back of each post, or fitted to the face using a bracket or screwing them to a short vertical batten fixed to the face.

Don’t Forget Caps on the Posts

One final task is to fit caps to all the fence posts. These are tapered to encourage water to run off the post rather than sitting on top and soaking down into the end grain of the post. If you don’t like the look of caps, cut an angle or two at the top of each fence post, before putting it up, to do the same job.