How do you Fit a Belt on a Tumble Dryer?

Home » How do you Fit a Belt on a Tumble Dryer?
Previous Next

How do you Fit a Belt on a Tumble Dryer? 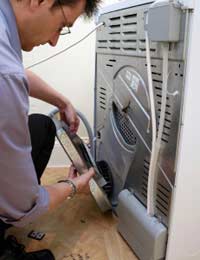 Tumble Dryers are relatively simple pieces of equipment, at least compared to their compatriots, washing machines.

Despite that inherent simplicity, replacing the belt on a tumble dryer can be a real pain in the neck. This is because the drum takes up so much room in the casing that it’s difficult to manoeuvre around it.

There are two things to do before you buy a replacement belt for a tumble dryer. The first is to check that the belt really is broken and the second is to assess whether or not you can fit the replacement. Make sure the machine is unplugged from the mains electricity before you start.

To check for a broken belt open the door and spin the drum by hand. If it rotates freely then the belt has gone, if it is stiff and resists movement then the belt is ok and the problem is more likely to be a seized drum.

Opening Up the Dryer

To see if you can replace the belt yourself take the lid off and then the back of the machine. You should then see the top of the drum with the groove where the belt should be. It may still be there, even though it’s broken, but if you lift it up it should come away.

If you can see and get to the whole path of the belt then there’s a chance you can replace it from there, otherwise you may have to dismantle the machine a bit more.

At this point we go into the realms of uncertainty. As there are so many different makes and models we can only give general guidelines.

Getting the New Belt in Place

Most tumble dryers run on a mounting point at the back and some sort of plastic pads of bearings at the front. You will have to get the new belt around the drum, either at the back or the front, depending on the model. This may involve removing the front panel and door of the dryer.

If you can hold the tensioner pulley in (or out) enough to get the belt over the motor pulley then great. It might help to have someone else holding the pulley against its spring. If you still can’t get it on you may have to dismount the motor to give you enough slack to get the belt on.

Then reassemble the machine and test it. Note that on some models the toothed side faces inward at the motor pulley but the flat side is placed against the drum surface, so you need to put a twist in the belt to achieve this. .